Poor Hillary Clinton.
While it is tempting to think of her recent illness purely in terms of its likely impact on her presidential prospects, it should be remembered that the Secretary of State faces a very serious medical condition. We all wish her well.
However, Mrs Clinton’s agony will undoubtedly have been compounded by the possibility that the news of her blood clot may well prevent her becoming the first woman president of the USA. Even more annoyingly, she has already had two great opportunities to achieve this in the past…
2004
It’s easy to see why Hillary didn’t run for the presidency in 2004. She had only been elected as a Senator in 2000, after all, and incumbent presidents – even terrible ones like Bush – are rarely defeated when they run for re-election. It made much more sense to hold out until 2008, when the field would be clear. Had I been writing this blog in 2004, I’d probably have urged her to hold out until 2008 too.
Yet in retrospect, 2004 might well have l have been the former First Lady’s best ever chance of winning the presidency for herself. Senator John Kerry who was not, after all, the most inspiring presidential candidate the Democrats have ever produced came within a hair’s breadth of dismounting Bush (Kerry is now, of course, Clinton’s most likely successor as Secretary of State). Bill Clinton too, it should be remembered, seemed to have little chance when he announced his candidacy against a post-Desert Storm President George HW Bush in 1991. A bolder attitude would perhaps have favoured her in 2004.
But then nobody knew about Barack Obama…
2008
Hillary Clinton came tantalisingly close to securing the Democratic nomination in 2008. Yet in truth, this time, she didn’t deserve it. Her campaign shared many of the faults of David Miliband’s campaign for the Labour leadership in 2010: arrogance and assumption that the prize was owed to them by right as well as support for the unpopular Iraq War.
Admittedly, Hillary was not to know just how strong a candidate her opponent Obama was to prove. She stayed in the race long after she should have pulled out, feebly claiming she needed to be on hand in case Obama was assassinated. It was not her finest hour.
2016?
Age does not seem to be the deterrent to high office that it can be in the UK. In the late Seventies and early Eighties, elderly leaders were the norm in Britain. Jim Callaghan was 68 when he stood down as Labour leader in 1980. The resulting leadership contest was between Denis Healey (62) and Michael Foot (67).
All of these men would live into their nineties: Healey is still alive today. Yet Foot’s advanced age was widely seen as a major factor in Labour’s landslide 1983 defeat. Since then, Britain’s leaders have got younger and younger. John Major became the youngest PM of the 20th century in 1990. He was 47. His successor Tony Blair was 43. David Cameron in 2010 was younger still. Today all three party leaders are well under fifty.
In the US, Reagan seemed to set a different precedent. While Foot had long white hair, a walking stick and glasses, Reagan (who was in power at the same time as Foot was Labour leader) had somehow retained his dark hair despite being two years older than Foot. Reagan was the first ever presidential nominee to be over seventy. Since then Bob Dole and John McCain have followed his example. Although, of course, neither won. Mitt Romney was 65.
So Hillary being 69 in 2016 was not seen as a serious obstacle to her running in 2016. And the omens looked better than ever after a successful stint as Obama’s first Secretary Of State.
But the blood clot is more serious. Hopefully, both Mrs Clinton and her presidential prospects will make a speedy recovery. 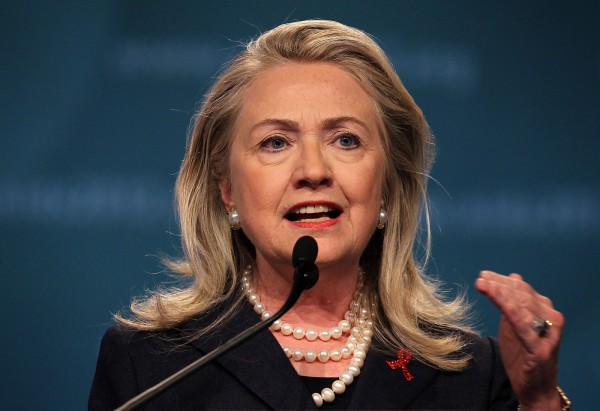