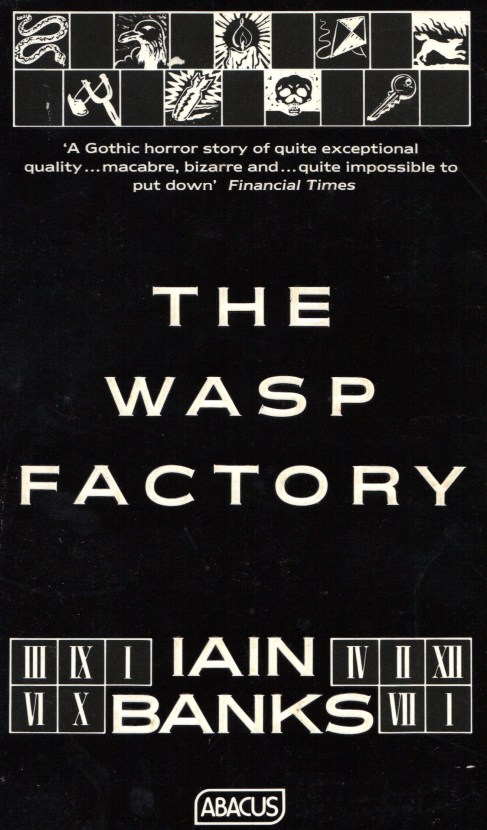 This week sees the thirtieth anniversary of the publication of Iain Bans’ controversial debut novel The Wasp Factory. It is a sad anniversary, in that for the first time Banks himself who died of cancer last year, will no longer be around to celebrate it.

In truth such was the tabloid furore surrounding the book in 1984 that Banks, then in his twenties, did well to ever escape the book’s long shadow. It remains perhaps his darkest book and one that I (perhaps wrongly) hesitate to recommend to readers who have never sampled Banks’ work before, even though it was the first one I actually ever read myself. That said, it is still quite mild next to some books which have appeared since (such as Bret Easton Ellis’s American Psycho). It is also still, alongside The Crow Road, one of Banks’ best and most famous works.

Banks was undeniably right to describe the book as a “dark comedy” though even though parts of the book (such as the reasons for his older brother’s breakdown) are deeply unpleasant. The main character Frank is undeniably deeply disturbed enjoying an isolated life with his retired ex-hippy dad, playing in a world of fantasy or fighting a giant bunny (a scene which actually appears to be based in the real world when activities around a rabbit warren get out of hand). But the wasp factory of the title isn’t a metaphor: it is a physical structure which Frank has built himself. And he is a killer. Grim though they are, Frank’s accounts of his murders are among the most memorable bits in the novel.

Throughout the book there are also subtle indications that something more is wrong with Frank. Unlike most teenage boys, he seems oddly repelled by women.

Thirty years on, The Wasp Factory remains hugely compelling from its odd unworldly opening to its very final line.