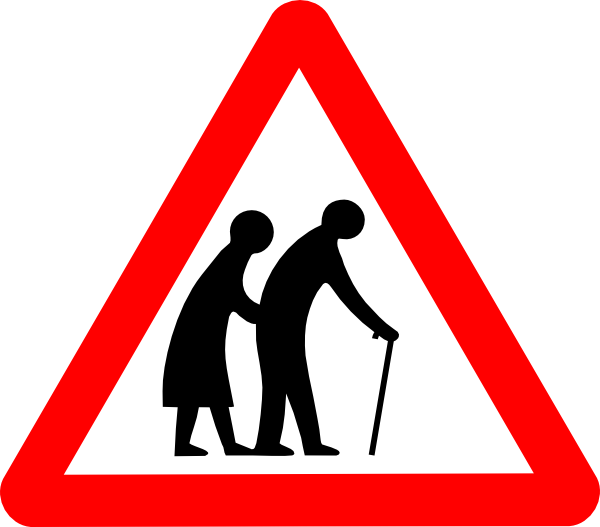 Old people are everywhere. They are in our shops, in our cafes and in our streets. It is sometimes said that everyone in London is just three feet away from an old person at any one time. Well enough is enough! It is time these geriatric invaders learned a few lessons about modern life. If you know any old people and can persuade them to look at the screen for long enough, show them this…

Granted old people may have worked their whole lives (in most cases) but they should remember that the usual social norms still apply to them. Shop doorways are for going through, not for standing in front of. Cinemas are for people to watch films in, not for you to gossip to your friends in. Queues are for queuing in: do not think you can always jump them. You don’t know that person on the bus? Then don’t start talking to them like an old friend just because they are also old!

Let’s face it: old people get away with being far ruder than anyone else would. “Yes, perhaps I am a bit fatter Nan, thanks for noticing.” “No Nan. It’s not political correctness. You haven’t been able to call them that for years.” And no! Believe it or not, you don’t have a superpower which enables you to identify which celebrities are likely to be convicted of sex offences before they have been accused of anything just because “they have a funny look about them”! If you did have this power, why didn’t you use this gift back in the Seventies when it might have done some good?

No, the past wasn’t all great. People were still hanged, everyone was racist and homophobic, food was rubbish, TV was boring, the monetary system was insanely complicated (240 pence in a pound?) and The Goon Show was totally incomprehensible. And if you love the idea of reintroducing National Service so much, might I suggest we reintroduce it for the over seventies only? Nobody else wants it. If you want to recreate your own Dad’s Army go ahead!

Believe it or not, they probably sell bread, milk and teabags wherever you are going anyway! Milk goes off you know? It’s not going to bankrupt you to obey some basic hygiene rules.

Ever wondered why so much of our TV is dull, moribund Downtown Abbey/Call The Midwife type stuff? Why whole channels cater exclusively to fans of Last of the Summer Wine, Heartbeat and The House of Elliot. You’ve guessed it! Because old people love this crap.

No! Your email hasn’t disappeared. The screen has just moved down a bit. How did I find out the Bruce Forsyth’s age so easily? Simple. I typed in: BRUCE FORSYTH AGE. No, don’t panic! It’s not an air raid. I’m receiving a text message on my mobile phone. Just as I did two minutes ago.

The Queen is the Head of the Church of England. She is 88. Her successor Prince Charles is already 65. The Pope is 77. The Vice President of the USA Joe Biden is 71 while the favourite to be the next US president, Hillary Clinton is likely to be close to 70 before she even gets there. The US Secretary of State John Kerry is also 70 while the most powerful man in the media world, Rupert Murdoch is 83!!

Many old people have legitimate grievances: they are ill, weak, lonely or cold in the winter. The rest of you though have nothing to complain about! If you’re seventy five now, you missed the world wars and Great Depression your parents suffered through and will miss having to work until ninety eight like the rest of us! You’re pensions are good. You are rich simply because you bought a house for about two pounds in 1968 and haven’t destroyed it. Be happy! Honestly, some old people don’t know they’re born.