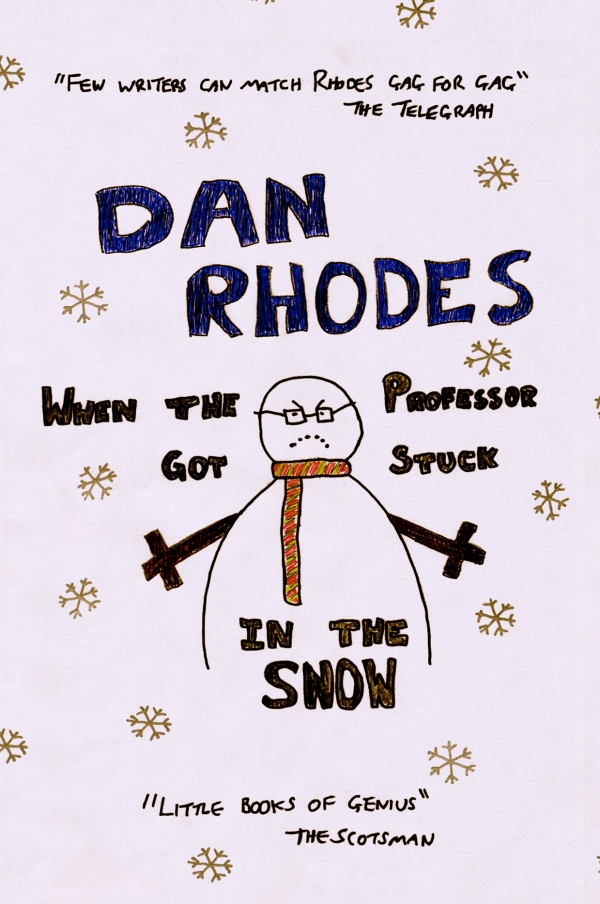 Dan Rhodes is one of the funniest writers in Britain today. He is also, on occasion, one of the saddest.

His early book of short stories Don’t Tell Me The Truth About Love included memorable works such as The Violoncello in which a boy turns himself into the instrument and Landfill, in which a man falls hopelessly with a girl who apparently lives in a landfill site. His novels deal with cannibalism (Little Hands Clapping), village life (Gold), an old man’s relationship with his dog (Timeleon Vieta Come Home) and the fate of the little white car which was sighted near Princess Diana’s fatal accident (er…The Little White Car).

Although very readable, he is not a writer who has ever seemed desperate for commercial success. Neither Don’t Tell Me The Truth About Love or Timoleon Vieta Come Home are tremendously catchy names, after all. His most recent book When The Professor Got Stuck In The Snow has not even been available most of the time since it was released. I was lucky enough to get one of the very few printed copies available, one of a batch of 400 hardback copies Rhodes self published in February 2014.

The book’s plot centres on how a fictionalised version of the eminent scientist and noted atheist Richard Dawkins finds himself stranded and snowbound in the village of Market Horton, accompanied only by his devoted male personal assistant Smee. Rhodes’ Dawkins is stubborn, vain, rude and absolutely hilarious. Obsessed with promoting the atheist cause to the extent that he rants about it in his sleep, Dawkins repeatedly insults his hosts, refers to his wife as “number three” to her face and is involved in a bizarre run in with real life children’s presenter Mr Tumble. His only true passion, we learn, is watching Noel Edmonds’ Deal Or No Deal.

The downside is that so fearful were publishers of facing litigation from the actual real life Richard Dawkins, they were wary of publishing it. Happily, Aardvark Bureau will be publishing a paperback version in October 2015.

One thought on “Book review: When The Professor Got Stuck In The Snow by Dan Rhodes”