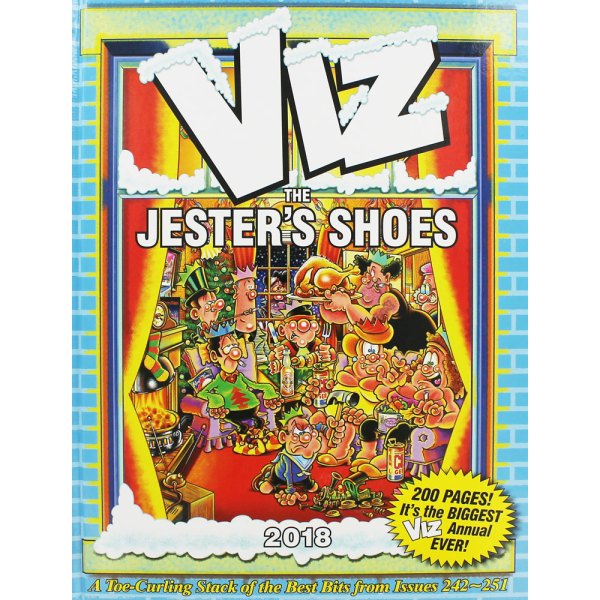 Where would the world be without Viz?

Well, in truth, it wouldn’t actually be very different would it? Most people don’t read it after all even in Britain, let alone the world. Most of you probably aren’t even reading this review. I know I’m not.

But, for those of us, who do, it is a joyous time. For a full 29 years after the release of The Big Pink Stiff One (i.e. the first Viz annual anthology), The Jester’s Shoes (no, I don’t get it either) is out. The cover describes it as “a toe-curling stack of the best bits from issues 242-251”. It is also at 200 pages, the biggest ever anthology of the ADULT COMIC yet.

Yes, just to emphasise this is an ADULT COMIC, just in case the phrase “Big Pink Stiff One” didn’t alert you to the fact. Any children thinking of reading this can piss off.

So what’s happening in this one?

Well, to pick at random, Sid the Sexist falls victim to a stage hypnotist, children’s favourite Hector’s House is subverted into Hector’s Whores (“C’mon Kiki the frog, give the cash to Daddy”), Major Misunderstanding takes exception to the phrase “Winter Wonderland,” The Fat Slags star in On The Game of Thrones and Roger Mellie: The Man on the Telly (who has appeared in every issue of Viz to date) offends Ann Widdecombe by making an obscene suggestion while drunk on the live TV Election Night Special.

There’s also the usual newspaper parodies (“Fuck all on Mars” and “Pope’s Hat ‘Fundamentally Flawed’, Say Scientists”) and the usual fun with regulars Mrs Brady Old Lady, The Bacons, The Real Ale Twats and much much more.

One thought on “Book review: Viz: The Jester’s Shoes”