Seemingly happily married with a nice house and two children, Adam Price (Richard Armitage) has a good life. Or at least, he thinks he does. That’s until ‘the stranger’ (Hannah John-Kamen) turns up.

One day, while he’s watching one of his kids play football, a young woman in a baseball cap approaches him and starts to make troubling and damaging accusations about his wife (Dervla Kirwan). Upsetting though this is, the stranger’s allegations cannot be easily dismissed. She clearly has insider knowledge and her claims seem to have the ring of truth about them. What should Adam do?

This is just the starting point for Netflix’s British-set crime drama, The Stranger which is based on US author Harlan Coben’s 2015 novel. And while never hard to follow, there’s a lot going on in this intensely plotted, incredibly gripping thriller.

Coben isn’t Albert Camus but his story certainly raises lots of interesting questions. Should Adam confront his wife or leave things be? Who is the stranger anyway? How does she know so much? Is she a force for good or evil? Does Adam have any skeletons in his own closet? Furthermore, what exactly happened at the wild teenage party Adam’s son attended? Why did a teenage boy end up running naked through the woods? Can Adam save ex-cop Stephen Rea’s house from destruction? And, most bizarre of all, why did someone decapitate an alpaca in the street?

As the rosette emblazoned (or, at least, drawn) on the cover reminds us, Viz has been doing this for forty years now.

Yes, that’s right. There have now been four whole decades of the popular British adult comic, which is ‘Not For Sale To Children’. In theory, this should mean it has now reached middle age or at least some semblance of maturity?

Has it though? Well, as Viz’s longest running character, the foul-mouthed TV personality, Roger Mellie, The Man on the Telly would say: “Hello, good evening and bollocks.”

In other words, “no”. As another publication which lasted in print for roughly half as long as Viz’s 40 years to date once memorably put it, this is a magazine “for men who should know better.”

This edition of the Viz annual, promises “a brassy fanfare of crowd pleasing blasts from issues 262-271.” So what’s included? 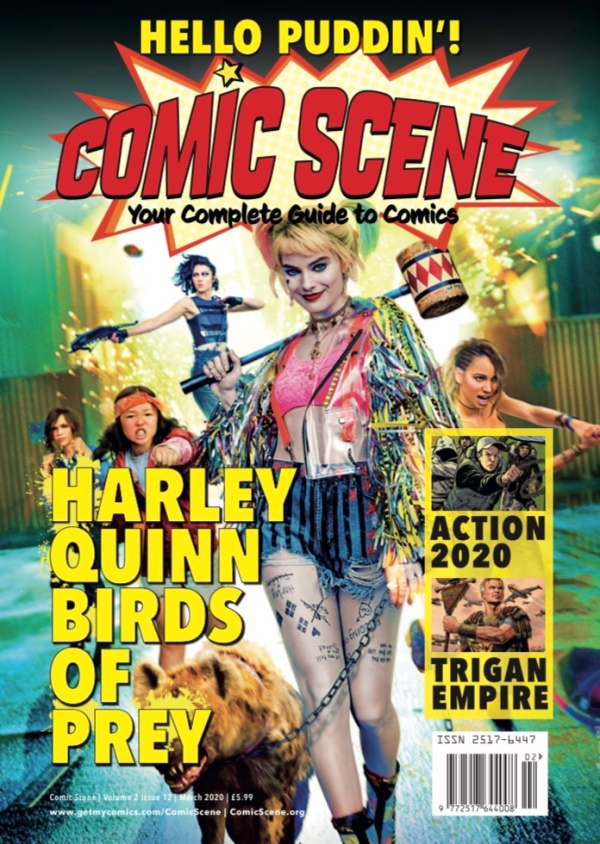 ComicScene Issue 12 comes out in stores across the U.K., Ireland, Australia, Canada and the USA from 20th February and you can ore order it now in print or digital at http://www.getmycomics.com/ComicScene

Order in print before 31st January and we will also send you a free copy of the 64 page Starblazer inspired Sentinel (while stocks last).

With any purchase in our ComicScene online shop before 29th February we will donate 50p to Little Heroes, the charity who make comic kits for kids in hospital.

Harley Quinn takes front and centre of Issue 12 with a beginners guide to her history and comics inside.

We go back to the 70’s and a look at the classic U.K. comics of that era including 2000AD, Battle and Action.