Al Pacino plays Danny Collins, a fictional music star whose career seems to have peaked at some point in the Seventies. Although not officially a has-been – he still appears to be very wealthy and is widely recognised by young and old everywhere he goes, Collins is unsatisfied. He hasn’t written a song in thirty years and seems less than enthused about his much younger fiancée (Katarina Cas).

While, as his agent (the ever excellent Christopher Plummer) points out, his problems are extremely minor compared to some people’s, the revelation that Collins was once sent an admiring letter by John Lennon which never got to him, triggers what can only be described as a very late midlife crisis. He begins to reassess his priorities attempting to rebuild relations with the family of his estranged son (Cannavale and Garner). He also moves into a hotel and soon he begins wooing the straitlaced manager (Bening).

The Lennon stuff seems to be largely an excuse to get some of the Beatle’s music on the soundtrack. This turns out to be a godsend as all the music performed by Pacino is absolutely awful. It is hard to see how Collins would ever have made it as a music star, even allowing for the fact that he is supposed to have worsened with age.

The performances are fine though particularly Garner and Plummer and as Collins notes he and Bening’s character do generate some “good patter” (as in banter).

The mock up album covers on the extras using pictures from Pacino’s own long career are good fun too. There’s an okay, short advertising featurette too in which Al Pacino at one point unwisely compares his decision to take the role to his decision to play Michael Corleone in ‘The Godfather’. Needless to say , the comparison to his past glories would have been best left unmade.

Happy families are all alike, Tolstoy famously wrote, but every unhappy family is unhappy in its own way. If this is true, then perhaps unhappy marriages follow a similar pattern. What isn’t in doubt and what becomes apparent very quickly in this is that the young couple, Dean and Cindy, portrayed here by Ryan Gosling and Michelle Williams, are a very unhappy couple indeed.

It also becomes clear very early on is that the narrative sequence of the film has been deliberately jumbled up. Yes, it’s one of those films a bit like Memento or Eternal Sunshine of the Spotless Mind. We might first witness (for example), a scene of a balding, drunken Dean consumed with suspicion, paranoia and jealousy over the suspected infidelities of his desperately unhappy wife. The next minute, he’s a happier, more charming and carefree younger man wooing the willing Cindy by playing (with unintentional irony) You Always Hurt The One You Love to her on his mandolin.

The emotional impact of the juxtaposition of these scenes is frequently devastating. Dean and Cindy can clearly barely speak to each other by the later stages of their marriage and as some very uncomfortable sex scenes make clear she is ultimately physically repelled by him. Neither character is entirely black and white, however, and while Gosling’s Dean is generally the less sympathetic of the two, even he musters some sympathy.

As you’ve probably gathered, Blue Valentine isn’t exactly a barrel of laughs. So why on Earth should you want to watch it at all?

The short answer is because it’s a superb, beautifully made film, criminally neglected at the Oscars. Although he perhaps doesn’t need an ego boost, Gosling consolidates his status (demonstrated in the underrated Lars and the Real Girl) as one of the best young actors in Hollywood. Michelle Williams is, if anything, even better, giving a heart rending Oscar-worthy performance. “The Creek” now seems like a very long time ago indeed: Dawson Leery wouldn’t recognise her.

There’s also a solid Bonus Features package including a commentary from director Derek Cianfrance and editor Jim Hendon, a Q and A session from the Sundance Film Festival and a making of featurette. There are also some home movie sequences, glimpsed briefly in the film, played out in full.

But if you’ve ever looked at an unhappy couple and wondered why they ever got together in the first place, this could be the film for you.

Not an easy evening’s viewing: the emphasis is more on the “blue” than on the “valentine”. But both Williams and Gosling are sensational and it’s undoubtedly one of the better films of the past year.

Q and A Featurette

Review: Queen Victoria didn’t just reign. She ruled.She in fact ruled for nearly 64 years, longer than anyone else, a record the present Queen may beat if she holds out until 2016 (update: this has since happened).

Yet while most films about, say, Henry VIII see him transformed from a handsome young Jonathan Rhys Meyers-type into an obese Charles Laughton-like glutton, movies about Victoria usually centre exclusively on her later years as a gloomy, sour faced old widow. This is different. Opening in the 1830s, we first meet Emily Blunt’s teenaged Princess Victoria as she develops an initially awkward romance with her German suitor, Prince Albert (Rupert Friend), before we move onto her early years on the throne.

In the meantime, she finds herself in a constant battle to assert her authority over her Germanic mother (Miranda Richardson) and bossy baron, Sir John Conroy (Mark Strong).

Although too tall and, frankly, much too attractive to be Queen Victoria at any age, Emily Blunt is otherwise perfect for the role while Rupert Friend is impressive as the crusading Albert. Some of the smaller roles are less well-handled, however. Paul Bettany just looks weird as the sixty-something Lord Melbourne and Jim Broadbent, while brilliant as ever as Victoria’s eccentric uncle, William IV, is so heavily made up that during the state banquet scene he resembles Bilbo Baggins at his eleventy-first birthday party.Yet, for the most part, the film is both visually authentic and well cast.

The problem really is the setting. Victoria came to the throne at a relatively peaceful time in the nation’s history. Her life wasn’t untroubled by any means, but despite a reasonable attempt to demonise Mark Strong’s Conroy, there’s little scope for dramatic conflict. Recognising this, screenwriter Julian Fellowes (Gosford Park) sexes up events by heavily fictionalising a major event towards the end of the film. This contrivance apparently provoked the ire of the present Queen, not a good idea if Fellowes ever wants a knighthood (update: Fellowes was elevated to the peerage in 2011).

The five featurettes here are all less than ten minutes long and primarily focus on the set design, costumes and historical background to the film. ‘The Real Queen Victoria’ is perhaps the best of these, enlivened by diary entries from Victoria herself, even if these are undermined by them being read by someone apparently auditioning for a part in ‘EastEnders’.

For quiet Sunday evening viewing though, The Young Victoria is hard to fault.

Overall Verdict:Blunt and Friend are okay and the central romance is well-handled but anyone fancying something racier should go for ‘The Duchess’ instead.

‘The Making Of Young Victoria’ Featurette

‘Lavish History: A Look at The Costumes and Locations’ Featurette 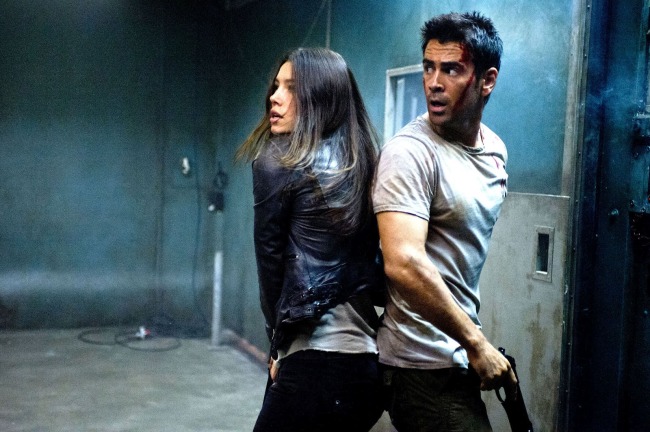 Why are so many remakes made in Hollywood?

Lack of creativity is often blamed but perhaps a bigger factor is the name recognition advantage a remade TV or film automatically has. Nick Love has, after all, made several crime dramas. But do the names The Business or Outlaw resonate as much as The Sweeney? And why bother promoting a brand new supernatural comedy when most people already know Ghostbusters?

Remakes that attempt to follow the original exactly: This sounds like a flawless strategy. But as Gus Van Sant’s pointless 1999 remake of Psycho demonstrated, the results are at worst bad (Vince Vaughn going through his “serious” phase as Norman Bates??) at best, pointless. See also: Peter Jackson’s King Kong.

Remakes that are nothing like the original: The Italian Job (2003) really isn’t a bad film at all. But aside from minis, crime and Italy, it bears no resemblance to the original whatsoever. No comedy clifhangers, self preservation society, no bloody doors blown off. Nothing. But if the film hadn’t technically been a remake, I wouldn’t be discussing it now.

Remakes of non-English language films:  A bit silly, of course, as most people can read subtitles. However, with the exception of The Vanishing, the record here isn’t too bad. Let Me In (a remake of the recent Swedish vampire classic Let The Right One In) and David Fincher’s The Girl With The Dragon Tattoo were all very close to being as good as the original, if not as good. Even The Birdcage (La Cage aux Folles) was pretty decent. But people do get snobby about this sort of thing.

Remakes/sequels which attempt to improve upon a flawed original: Perhaps the best argument for remaking anything. Louis Leterrier’s The Incredible Hulk was close to being a sequel to Ang Lee’s Hulk but with a different cast. The recent Dredd was also an improvement on the terrible Judge Dredd (1995) starring Sylvester Stallone. But none of these remakes were great either. And why the remake of The Amazing Spider Man (2012) so soon after Spider Man (2002)? Was the new film good? Yes. Did the new cast work well? Yes. Was there anything wrong with the original? No. this was a remake when a sequel would have worked just as well. Did we really need to see how Peter Parker became Spiderman again? I can see the argument for remaking the flaccid Superman Returns (2006)as Man of Steel though. Most people have forgotten it already.

Remakes that are so terrible they shame the memory of the original: Get Carter. Alfie. Fame. Shaft.  The Fog. The Stepford Wives. Poseidon. A Nightmare on Elm Street. Halloween. Rollerball. The Ladykillers.  Straw Dogs. The Time Machine. Sadly this is by far the biggest category. Even when a good director attempts to put a new spin on a classic as with Neil La Bute’s The Wicker Man or Tim Burton’s Planet of the Apes, the result is still often appalling.

Remakes which surpass the original: Yes, this does sometimes happen! True Grit, Ocean’s Eleven or Total Recall. The trick seems to be to try to remake something that wasn’t great in the first place. David Cronenberg’s The Fly (1986) or John Carpenter’s The Thing are also solid examples.

Did Arnie really seem convincing as an ordinary construction worker at the start of Total Recall? No. Colin Farrell is less good with the catchy pay offs but much more convincing as a real man. And thank God there was no more of that “suffocating in the Martian atmosphere” bollocks. But yes, the original score was better.

Here are some films that are ripe for the remake treatment: